Zero Marginal Cost, is it even possible? 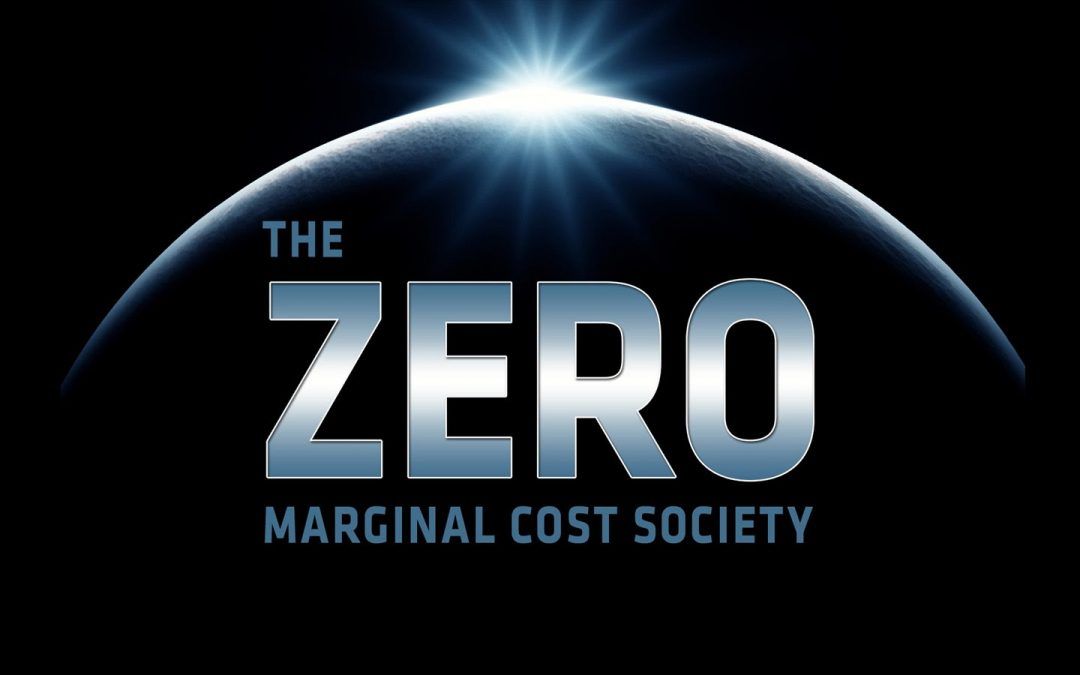 In a capitalist market, governed by the invisible hand of supply and demand, sellers are constantly searching for new technologies to increase productivity, allowing them to reduce the costs of producing their goods and services so they can sell them cheaper than their competitors, win over consumers and secure sufficient profit for their investors. Marx never asked what might happen if intense global competition some time in the future forced entrepreneurs to introduce ever more efficient technologies, accelerating productivity to the point where the marginal cost of production approached zero, making goods and services “priceless” and potentially free, putting an end to profit and rendering the market exchange economy obsolete. But that’s now beginning to happen.

Over the past decade millions of consumers have become prosumers, producing and sharing music, videos, news, and knowledge at near-zero marginal cost and nearly for free, shrinking revenues in the music, newspaper and book-publishing industries.

Some of the US’s leading economists are waking up to the paradox. Lawrence Summers, former US treasury secretary, and J Bradford DeLong, professor of economics at the University of California, Berkeley, addressed this in August 2001, in a speech delivered before the Federal Reserve Bank of Kansas City. Summers and DeLong focused their presentation on the new communication technologies that were already reducing the marginal (per-unit) cost of producing and sending information goods to near zero.

But, Is it possible to have zero marginal costs really? If so, how?

In The Zero Marginal Cost Society, New York Times bestselling author Jeremy Rifkin describes how the emerging Internet of Things is speeding us to an era of nearly free goods and services, precipitating the meteoric rise of a global Collaborative Commons and the eclipse of capitalism.

Rifkin uncovers a paradox at the heart of capitalism that has propelled it to greatness but is now taking it to its death―the inherent entrepreneurial dynamism of competitive markets that drives productivity up and marginal costs down, enabling businesses to reduce the price of their goods and services in order to win over consumers and market share. (Marginal cost is the cost of producing additional units of a good or service, if fixed costs are not counted.) While economists have always welcomed a reduction in marginal cost, they never anticipated the possibility of a technological revolution that might bring marginal costs to near zero, making goods and services priceless, nearly free, and abundant, and no longer subject to market forces.

Now, a formidable new technology infrastructure―the Internet of things (IoT)―is emerging with the potential of pushing large segments of economic life to near zero marginal cost in the years ahead. Rifkin describes how the Communication Internet is converging with a nascent Energy Internet and Logistics Internet to create a new technology platform that connects everything and everyone. Billions of sensors are being attached to natural resources, production lines, the electricity grid, logistics networks, recycling flows, and implanted in homes, offices, stores, vehicles, and even human beings, feeding Big Data into an IoT global neural network. Prosumers can connect to the network and use Big Data, analytics, and algorithms to accelerate efficiency, dramatically increase productivity, and lower the marginal cost of producing and sharing a wide range of products and services to near zero, just like they now do with information goods.

The plummeting of marginal costs is spawning a hybrid economy―part capitalist market and part Collaborative Commons―with far reaching implications for society, according to Rifkin. Hundreds of millions of people are already transferring parts of their economic lives to the global Collaborative Commons. Prosumers are plugging into the fledgling IoT and making and sharing their own information, entertainment, green energy, and 3D-printed products at near zero marginal cost. They are also sharing cars, homes, clothes and other items via social media sites, rentals, redistribution clubs, and cooperatives at low or near zero marginal cost. Students are enrolling in free massive open online courses (MOOCs) that operate at near zero marginal cost. Social entrepreneurs are even bypassing the banking establishment and using crowdfunding to finance startup businesses as well as creating alternative currencies in the fledgling sharing economy. In this new world, social capital is as important as financial capital, access trumps ownership, sustainability supersedes consumerism, cooperation ousts competition, and “exchange value” in the capitalist marketplace is increasingly replaced by “sharable value” on the Collaborative Commons.

Rifkin concludes that capitalism will remain with us, albeit in an increasingly streamlined role, primarily as an aggregator of network services and solutions, allowing it to flourish as a powerful niche player in the coming era. We are, however, says Rifkin, entering a world beyond markets where we are learning how to live together in an increasingly interdependent global Collaborative Commons.